In a time when The Ancients tore skies and shook seas, the shores of Mo’anha lay crimson with the blood of their fallen.

The creatures were feral and storms lay siege to every island - nothing could rest or survive, save for the temple that stood proud on the central island, Aloha; in the eye of the storm.

The trees bore a forbidden fruit that was fed to those that could serve, creating thralls enslaved to loyalty and fear. Tendrils of shadow, shattered through the ground and coiled the atmosphere; ensnaring anything in their path.

This - was how The Ancients kept their power, their lust for dominance and control. Most if not all races that dwelled on the neighbouring lands; lived within their towering shadows - save for one.

A race known as the Kamina, pure of one sex - were snatched from their towns and cities to fulfil The Ancients need to breed.

The Ancients reproduced, only their own kind through mating with any race - they wanted to combine their power with that of the significant magical abilities of the Kamina.

But - little did they know, the Kamina had the same ability upon breeding; which The Ancients found out the hard way.

The Kamina were slaughtered for a betrayal that was out of their control, but one mother and child escaped the temple and survived discreetly on the Mo'anha islands.

They had made it to the central island outskirts, keeping out of sight of The Ancients ever-watchful eye. Over time, the child grew into a strong woman - and upon the day she buried her brave mother, she sought to punish The Ancients for what they had done to her kind.

She trained her abilities for years, until the day finally came when she achieved something The Ancients could not; invisibility.

The Kamina survivor, snuck into the main temple on the Aloha island, and searched for a way to end them. Only upon stumbling across an archive where she found a book that could change a race, for the entirety of their existence.

The Spell was called, ‘Roots of Annihilation’. 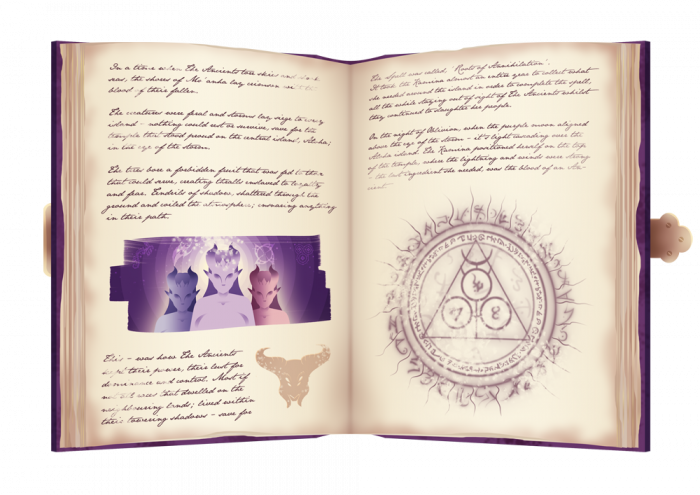 It took the Kamina almost an entire year to collect what she needed around the island in order to complete the spell, all the while staying out of sight of The Ancients whilst they continued to slaughter her people.

On the night of Oblivion, when the purple moon aligned above the eye of the storm - it’s light cascading over the Aloha island. The Kamina positioned herself on the top of the temple, where the lightning and winds were strong - the last ingredient she needed, was the blood of an Ancient.

Letting her invisibility fade and revealing herself, she called out to the skies.

“Here, a Kamina you have yet to devour, come - take my light!”

A bolt of lightning struck the floor in front of her, and a terrifying creature stood in it’s echo, an Ancient; towering over her - his eyes glowering and teeth bared.

“I am the creation of your mistake - and I will be your end!” She called up to The Ancient, her eyes cold waiting for the perfect time to strike, her hands free, but her tail coiled around a dagger hidden behind her back.

A dagger she’d made from the bones of a creature she’d hunted and killed on the Aloha island; as part of the spell’s ritual.

Rain poured down on them both as The Ancient simply laughed at her words.

“I have killed more of your kind then you have slept nights under our moon - your existence is nothing more than a speck of dust in the wind, and your words a pebble in a raging sea.” The Ancient barked, taking large heavy steps towards the Kamina, tendrils spiralling from their back creating nightmare shadows across the Kamina’s pale skin.

“One more of your kind falling under the weight of my fist, will not make me lose sleep.” With that, The Ancient’s tendrils spiralled around the Kamina bringing her toward him as they grew tight, threatening to squeeze the life from her.

The Kamina’s tail snaked around and pierced the dagger into The Ancient’s chest - slicing through his heart.

All four of the Ancient's eyes widened, his tendrils vanishing - the Kamina falling to the ground. She wasted no time and slammed her hands against his wound; runes appeared around the dagger lodged in it's chest, black blood, bubbling around the blade.

She chanted the ‘Roots of Annihilation’ spell, her eyes glazing over with an icy darkness as her words created a shield of void, reflecting the storm around them.

The spell burst; and released shockwaves of shimmering pitch fog, devouring each and every Ancient across the lands.

No one knows what became of the Kamina or The Ancient; the root of the spell. What little we know of our heritage only lead us to fill in the gaps ourselves and learn from our ancestors mistakes.

The spell was believed to be the end of The Ancient’s reign and the beginning of the Dralic’s existence.

We are the descendants of an ancient and powerful race - embodying the very curse, our predecessors brought upon themselves.