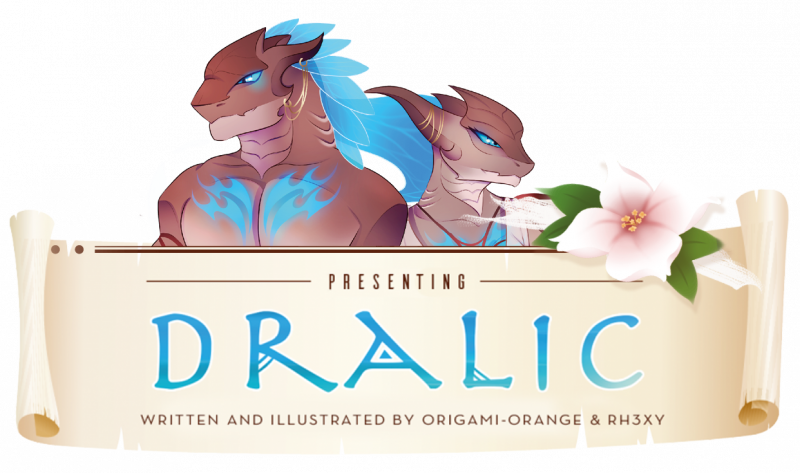 Known for their proud demeanour and strong physique, Dralic are creatures of elemental energy. They believe solely in the combination of the mind, body and spirit - entwining with the energies that embody the natural elements of their world.

The Dralic that dominate The Mo’anha islands consist of vastly different environments; each of them unique to their clans. No one knows how their appearances became so different, evolved to survive on the islands they’re born into.

But they hold what little of their heritage they know dearly, the legend of their once powerful and divine predecessors - drive them to strive for a challenging and bounty-full life. 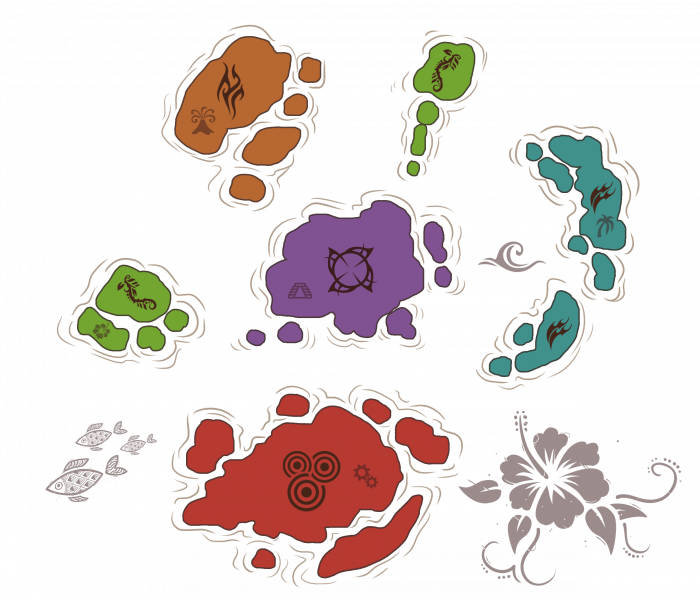 The Dralic of The Wai Islands, are referred to as the Ka’Wai - known for keeping to old traditions; living by the way of the ancients and finding peace in a simple life. Their islands are thin and small; surrounded by deeper waters making Ka’Wai a small quint clan - using their abilities mostly for fishing, aqua-dancing/entertaining, surfers and reading the ocean waves when navigating ships across the sea.

Whilst all Dralic’s have aquatic features such as gills and finned tails, the Ka’Wai tend to have slightly elongated fins and certain characteristics for both male and female are coloured a sea blue. Warriors of the Wai Islands defend the small community from large sea creatures that tread the deep shores. 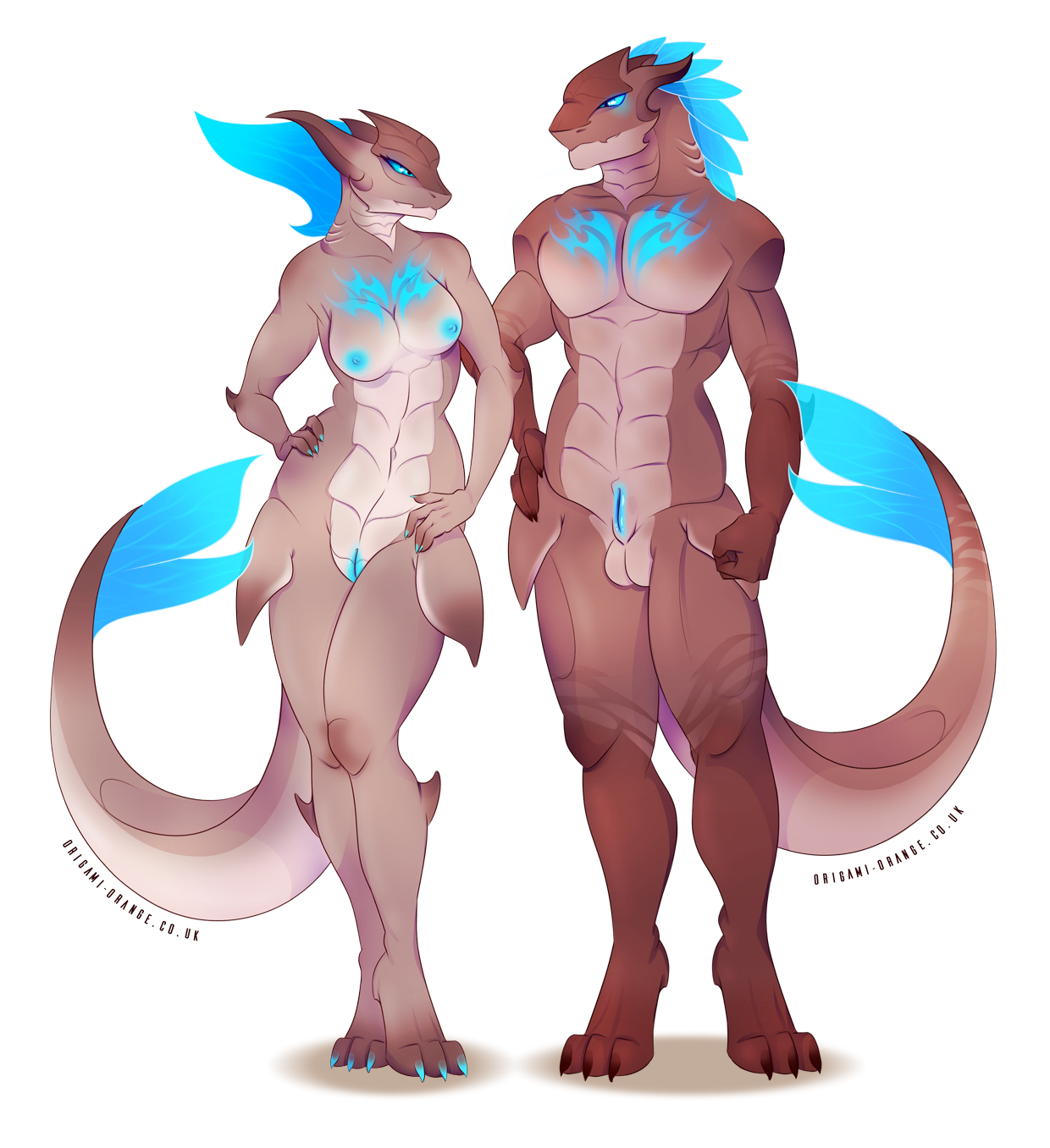 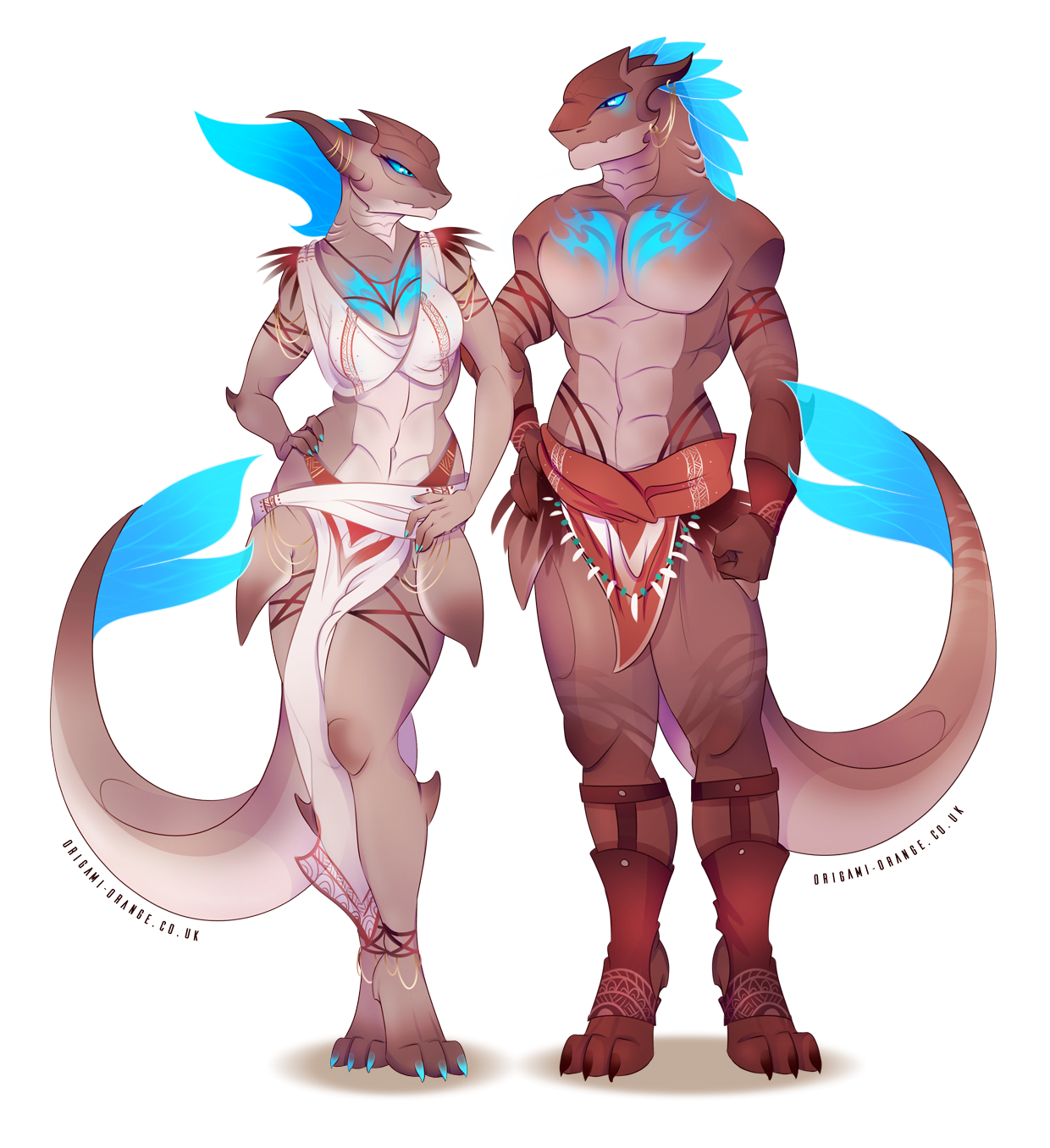 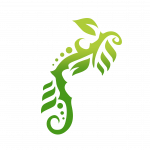 The Dralic of The Ola Islands, are referred to as the Olha - known for the love of their islands and the rich soil that grows the rarest and potent plant-life out of all the Mo’anha islands. Their lands are small and separated by the Ahi territory but are greatly established for their alchemists, healers and hunters; using their abilities to heal, and help the wilderness grow.

Because of the vast vegetation on the Ola Islands - their lands are inhabited by plenty of creatures to hunt as food, or train as familiars. Certain characteristics for both male and female are coloured a moss green - their claws and tails are slightly elongated compared to most Dralics to help them climb the large trees that make up their expansive rainforests.

More About The Olha 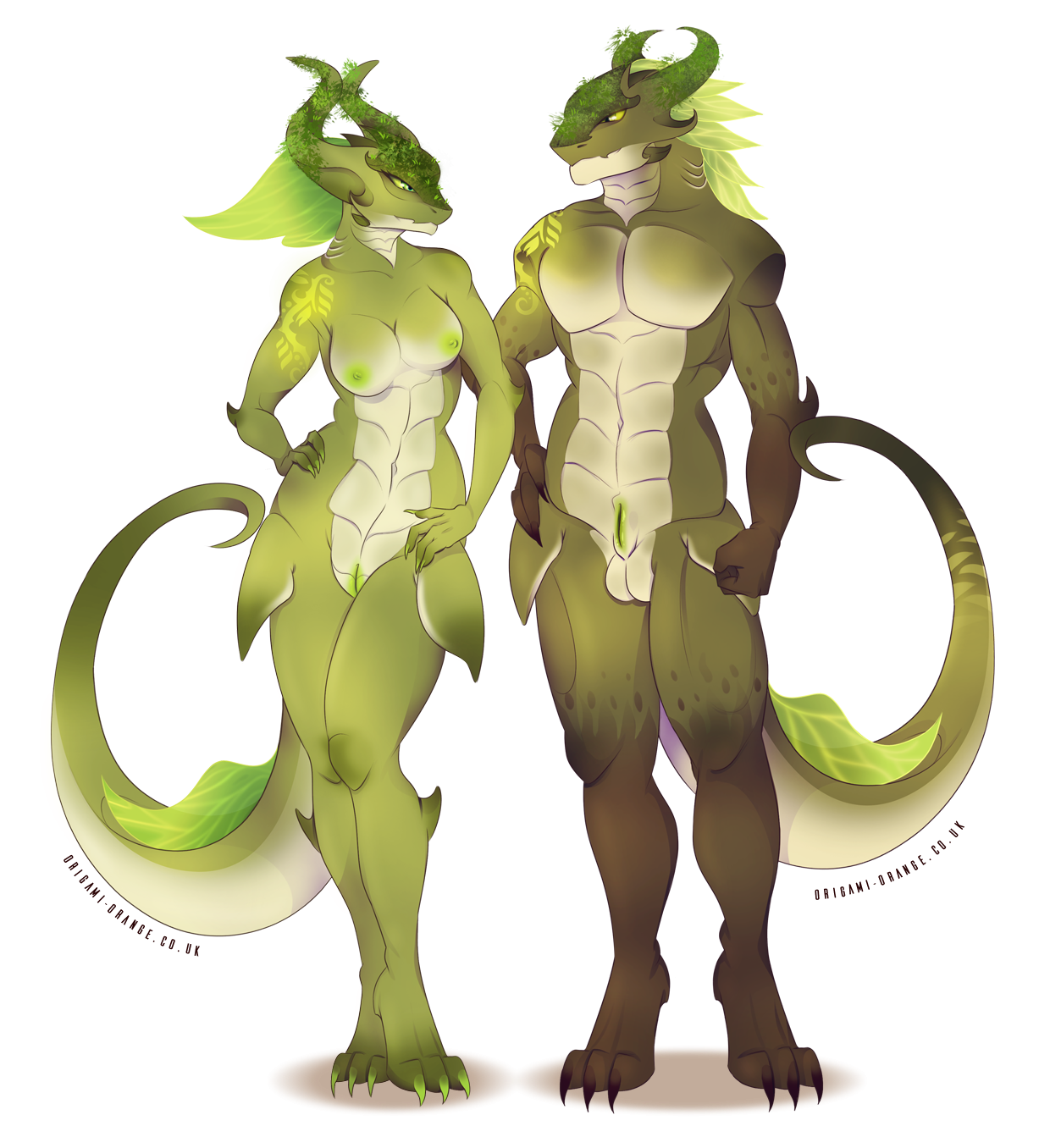 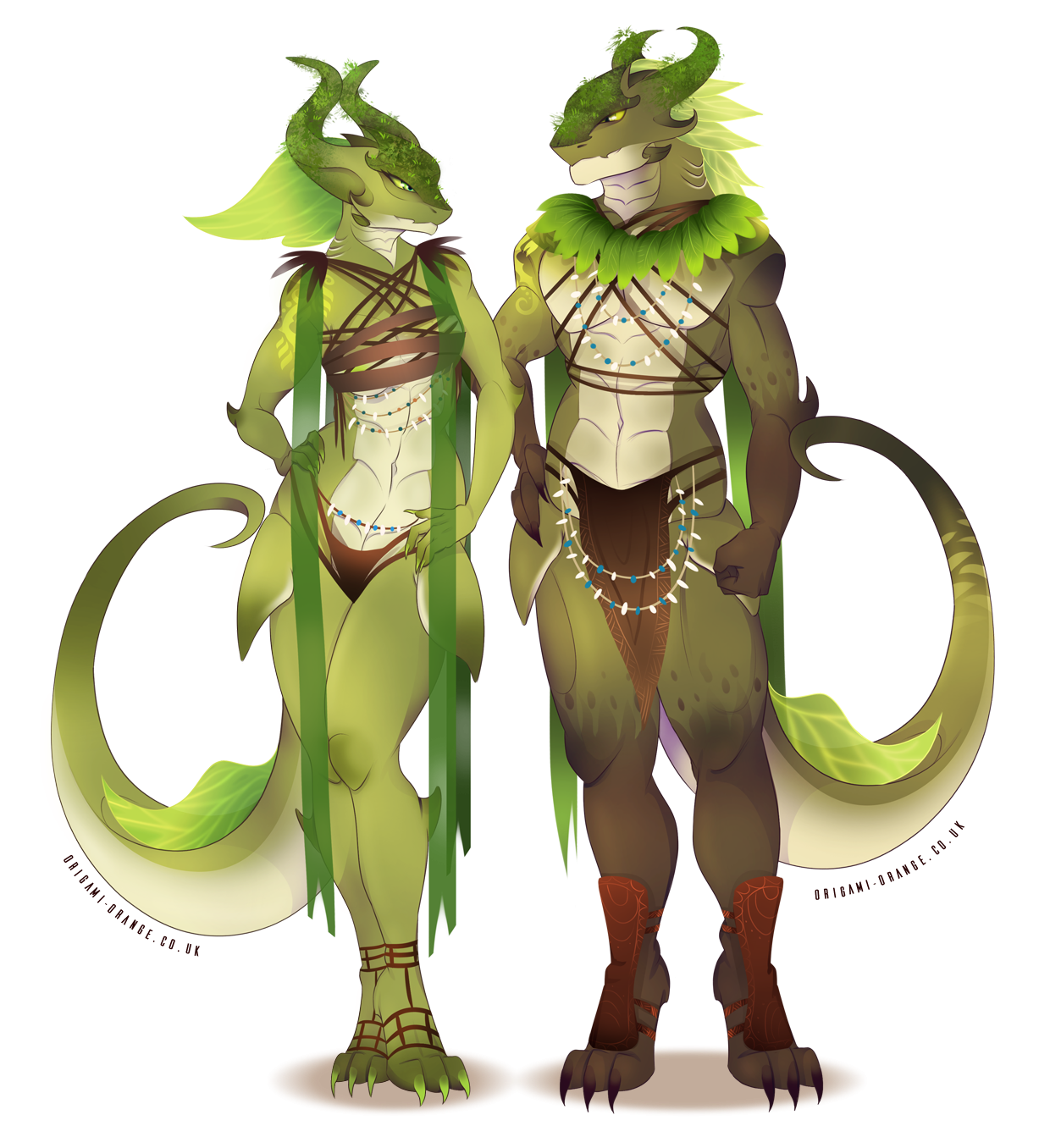 The Dralic of The Ahi Islands, are referred to as the Aciha - known for harvesting the rich metals buried within their lands; creating metallic contraptions that run on steam and heat. Their islands are intensely hot and dotted with active volcanoes they harness for their largest blacksmiths. The Aciha able to control fires and heat usually used in the large forges within the volcanoes that make up most of their larger island.


Established for their metal-workers, warriors and inventors - their features are stained with fiery colours and are adorned with hardened plates along their skin and the top of their head; protecting them from the sheer heat. Warriors are trained to protect the Mo’anha islands from invaders and creatures; wielding the very weapons forged by their brethren. 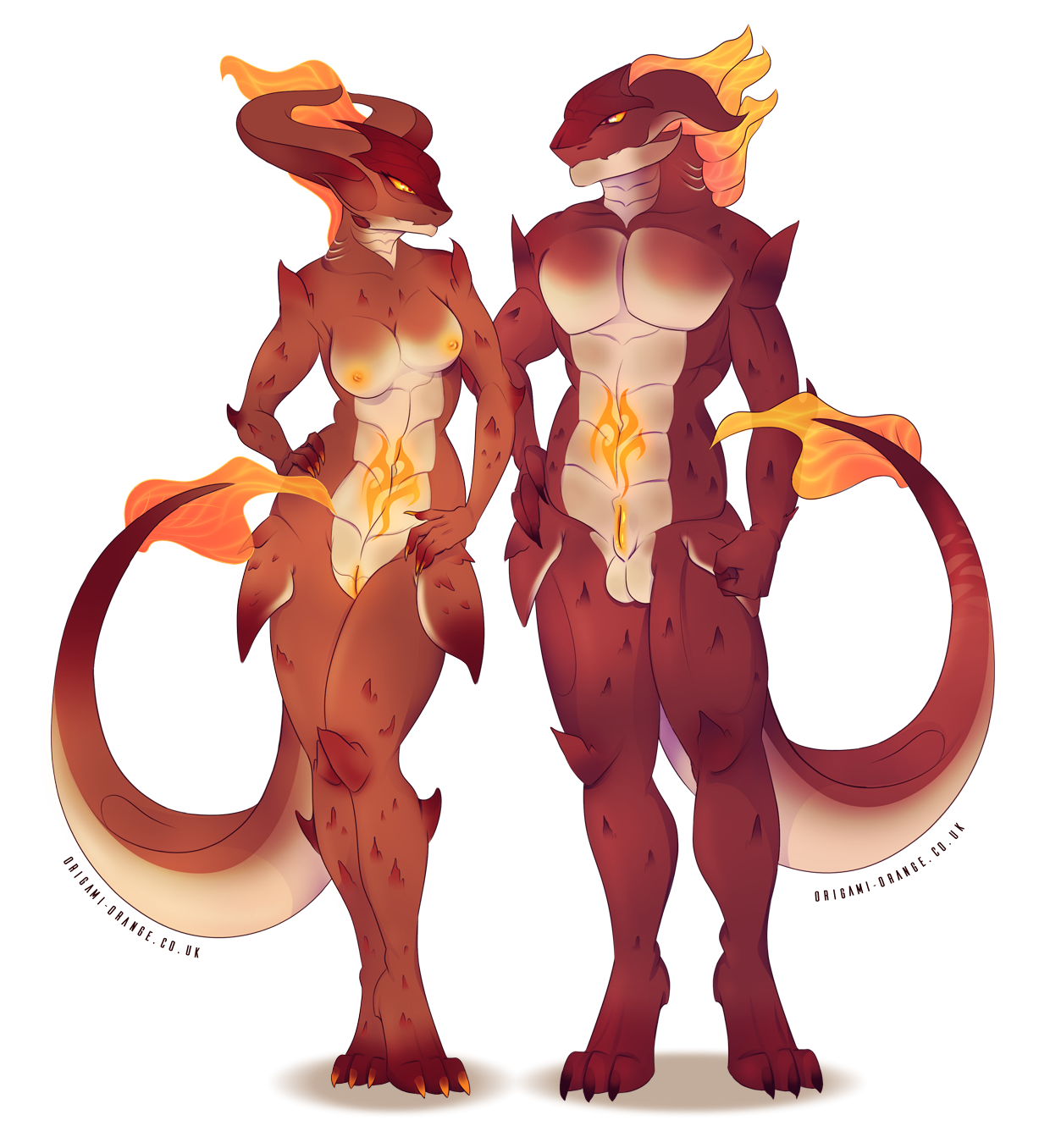 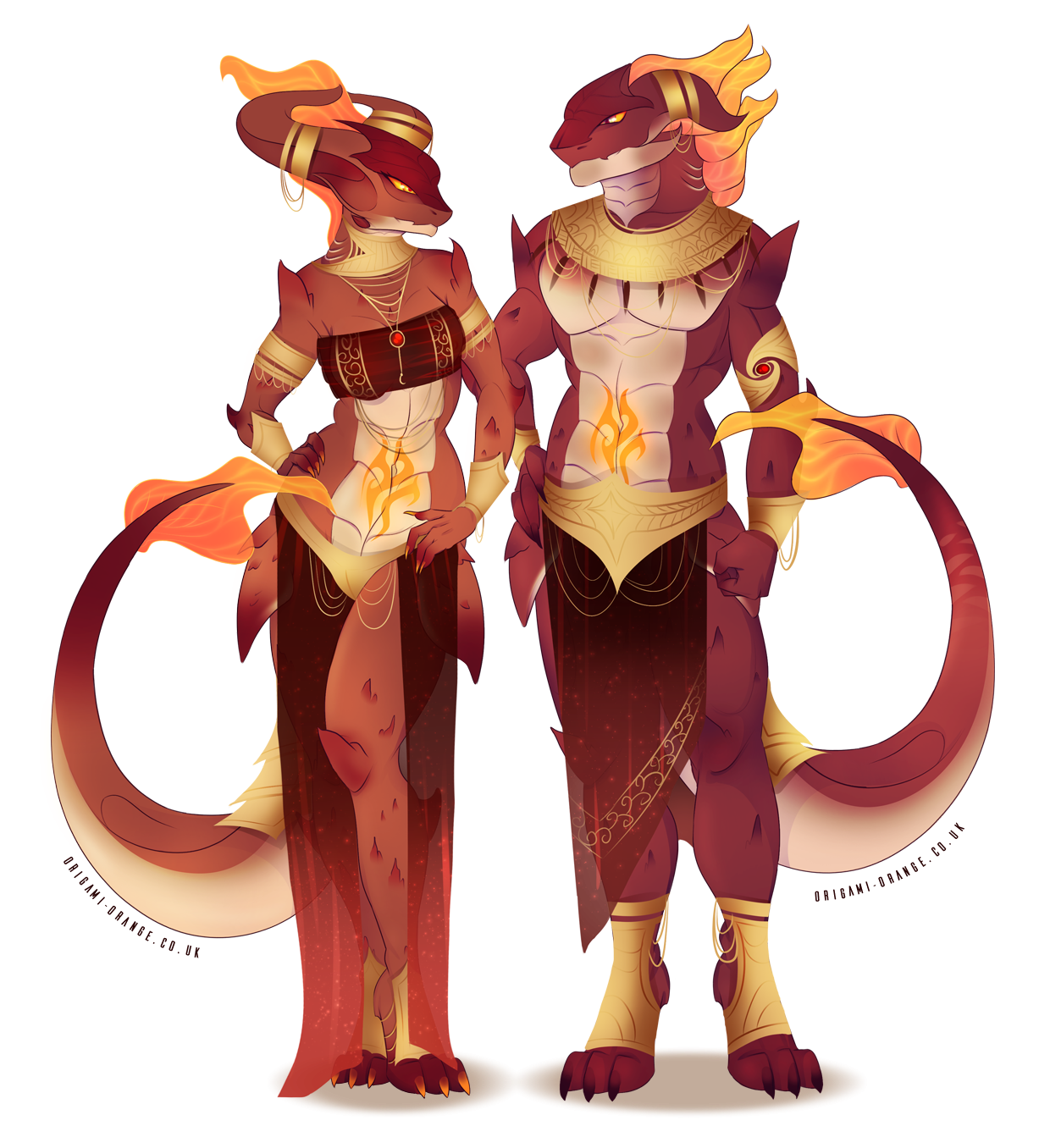 The Dralic of The Hona Islands, are referred to as the Honua - known for their large clans and tall buildings - their lands are larger than any other clan island of Mo’anha. This lead to the Honua to expand their villages, building large temples and buildings from the thick clay and stone; even bending earthen metals and minerals to their will through their elemental connection with the earth.

Because of their vast lands - they have the largest population, established for their architects and builders; which created the network of tunnels that connect the Mo’anha islands. Besides certain characteristics coloured an earthy red - they’re born blind and learn from birth to design, build, forge and live through sound and touch alone.

More About The Honua 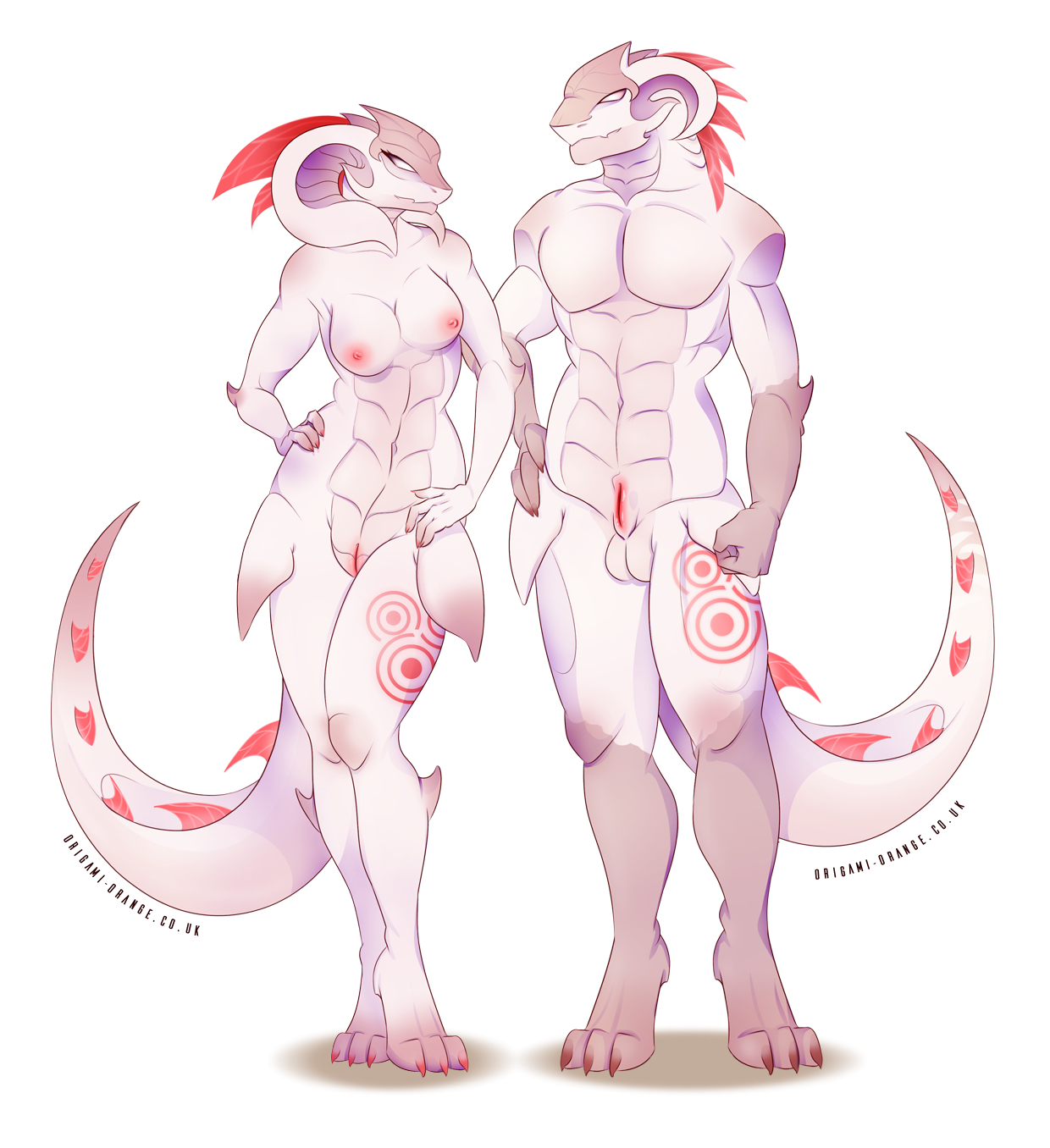 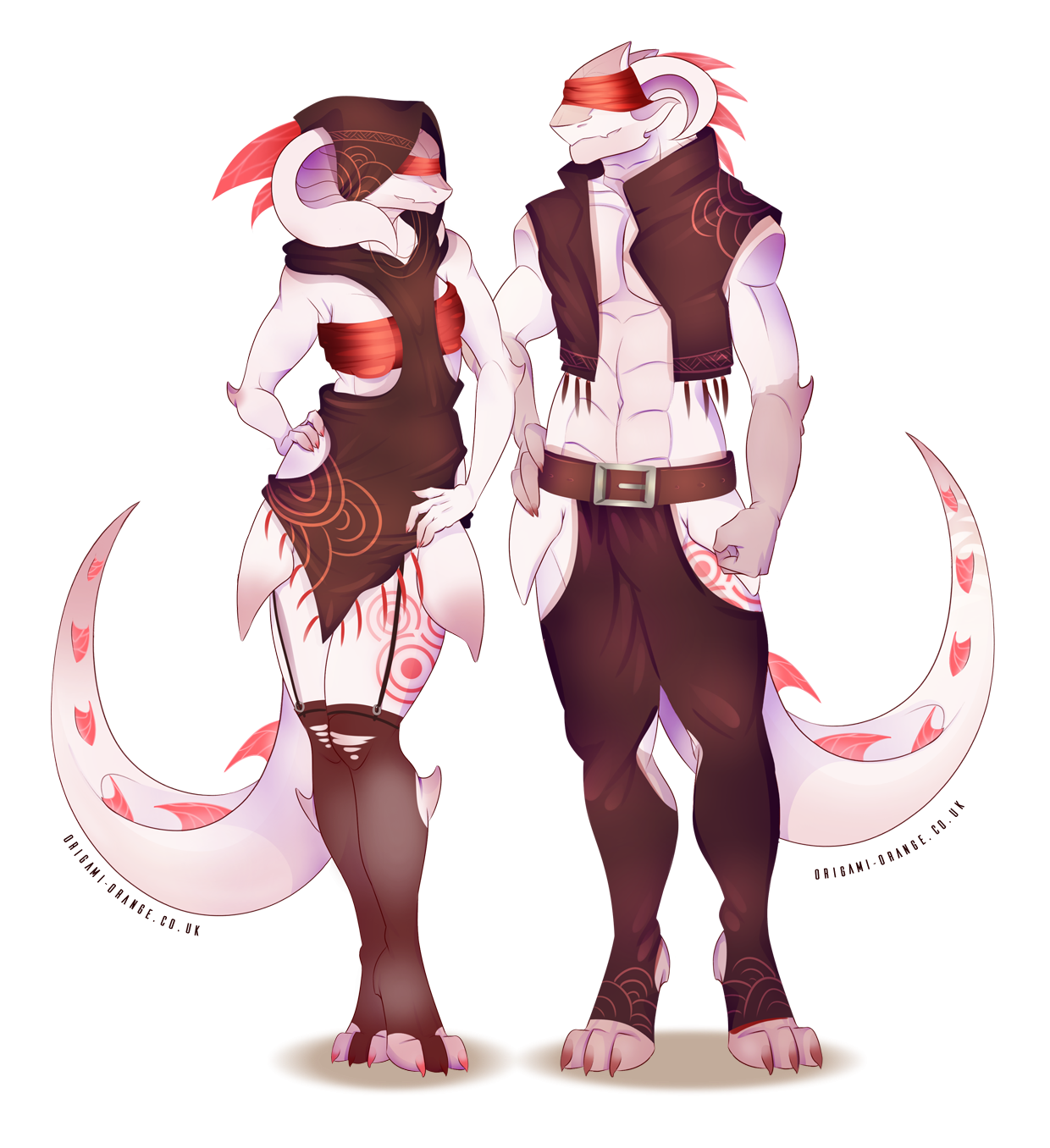 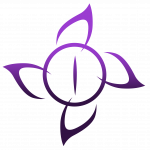 A Dark and mysterious race known as the Hewa, but are commonly called Void Walkers by those that fear them - they dwell on the Aloha islands, rebelling against Dralics sacred culture and traditions. Rather than worshipping the change in which created the Dralic and ended the Ancients, they worship and practise the ancient magic of their predecessors.

Because of their bond with the Ancient's power, known as 'Oblivion Source' their anatomical aspects radiate with a mystical purple, and an orb of Oblivion Source spirals and sparks between their horns.

The Hewa, are not born in this state, only becoming Hewa once they have been bathed in 'Oblivion Source' - which means any Void Walker, could have been from the Ka'Wai, or Olha clans - their elemental traits tainted by that of that Source giving their energies, traits of The Ancients.

Bathing in the Oblivion Source leaves any Dralic infertile and unable to conceive/lay eggs. This side-effect of the transformation can lead some Hewa Cultists to steal eggs from other clans to raise as their own under the Hewa beliefs.

More About The Hewa 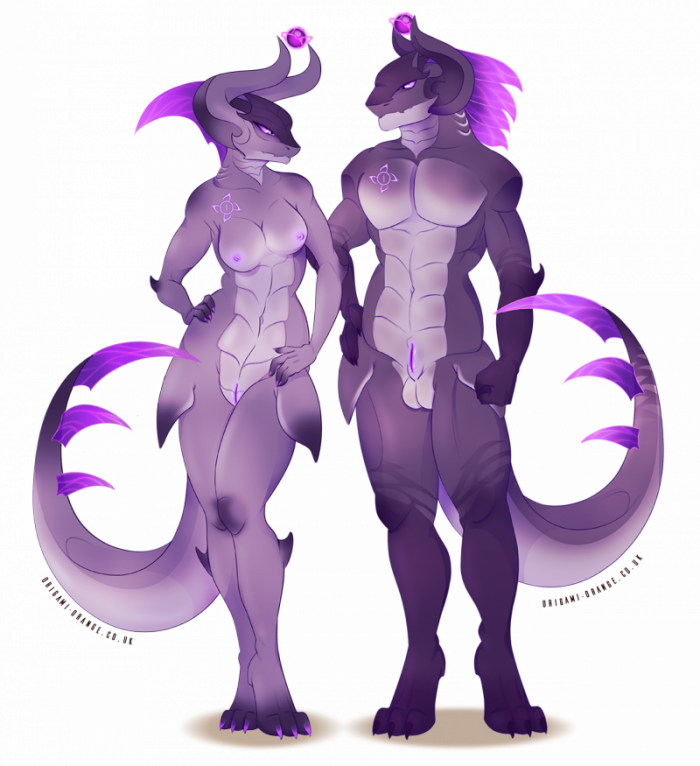 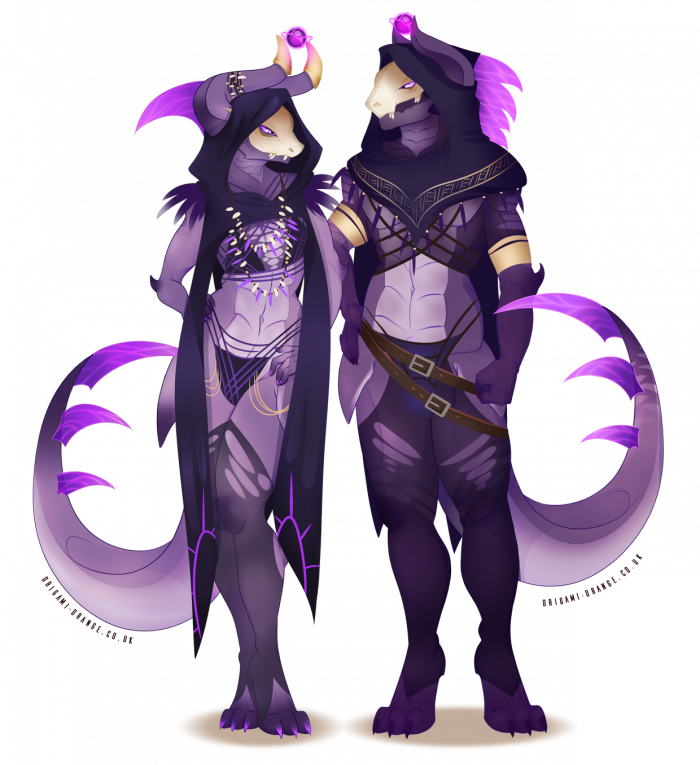