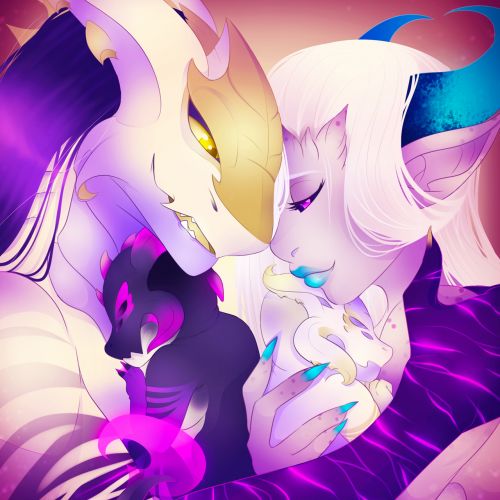 The Story of the First Obsidians

A few hundred years ago now - the Hewa cultists had managed to get their hands on a single Dralic egg, stolen from one of the Ka’wai Mothers who gave birth on the Aloha Islands. Since the Hewa Cultists; with their blood tainted of the Oblivion Source, are unable to conceive - stealing eggs was their only way to spread their beliefs and spawn Hewa younglings.

However - this particular egg, the Hewa Cultists had plans for, having known the powers the Oblivion Source gave them after they were hatched, they believed bathing the egg in the source would give them even greater power.

They dropped the egg in the swirling pool of void watching it sink into the thick darkness - for a while they thought it destroyed but noticed the egg start to resurface.

They waited months for the egg to hatch, but nothing - believing the egg had died, they never tried the process again and the egg was stolen from them by the original mother.

In her grief at what the Hewa had done, she snuck aboard a merchant ship and disappeared from the Mo’anha Islands with the tainted egg.

She found herself north - near the Dragon Teeth mountains, finding shelter within the Valkte’s City of Drista.

Here - she hid away from prying eyes - continuously trying to heal her egg with remedies and potions, but nothing.

After six months, the mother had all but given up hope and decided to bury the egg in the snow just outside the city in a nearby ice cave.

Pulling the snow around the egg, her tears falling into the mound - she debated whether to stay here and wait for her own death.

Suddenly the mound of snow around her egg started to shake and crumble away from the shell - revealing a little crack.

Her eyes widened as the crack spread across the shell until finally, a little tail slid out - slowly wagging side to side.

She started to help peel away the cold shell, piece by piece revealing strange colours and a beautiful hatchling.

He had pale skin, dark purple arms that resembled the shell and his fins were golden matching his eyes…

She’d never seen anything like him - and knew from then on they would have to live in hiding.

Over the years of raising him, she’d learnt her son, Altair, had different and amazing abilities.

He was able to manipulate different elements, this was more than just a mere connection the other Dralic and herself had. He could touch an element and move it to his will - each time, his fins changed colour and the veins of source in his arms would glow.

They’d set up in the ice cave - only going into the city for food and clothing keeping her son wrapped up and hidden from the world.

When Altair reached the age of 21 - his mother passed away. Altair had crystalised her in a shard of ice within the cave they lived in - sealing it off so none could disturb her body.

That was how he met Phina; a Kamina wanderer, who’s magic was tied to the creatures of the world. Through her eyes, he saw more than he imagined, flying above the clouds on the backs of creatures like you’ve never seen. Swimming with giant serpents deep underwater - they didn’t leave each other’s side, experiencing the world together.

Overtime Altair trusted her more than he thought possible and knew on occasion she’d noticed his difference in appearance from other Dralic, but had said nothing nor treated him any differently all the same.

One night - as the snow and winds blew strong against their dimly lit tent, he told her the story his mother had once told him.

How he came to be, what he’s able to do and why he must hide from the world - Phina listened intently and gave only a few comforting words that melted his world.

They spent the next few years of their lives travelling the world, entwined within their own love for each other - Phina became pregnant.

This was a time when there were few Dralic that explored the other realms, so mating with one was all but a mystery to most. Phina explained, that when the Kamina mated with another they only gave birth to their own kind.

Altair didn’t care and only felt love for her and his unborn children - but was beyond worried by what they would conceive given the Oblivion source was in his veins.

To calm his forever worrying mind, they sought out the Dralic of his homeland - The Elders listened to their story and they too were unsure of what would happen to their younglings.

So, they beseeched the Guardians - it was rare for an outsider to be allowed an audience or to even tread upon their sacred lands of the Aloha islands. But this was an exception.

The Guardians harkened to the Elders call and emerged in their Dralic form.

After explaining their story once more - the Empress stepped forward and laid a hand on Phina’s round stomach.

Her eyes went white, glowing softly as she spoke.

“You harbour the blood of the Ancients in your body. They are a form unknown to us and yet familiar in mind, body and spirit. They will either be the beginning of a new world or the end of this one.”

The Guardian’s words rang in their minds for a time - until the day came when Phina gave birth to their children.

The moment their little eyes opened up at them - their hearts melted and the words of the Guardians were forgotten.

Phina would sing a soft lullaby to help her children sleep...

Little was heard of them all after their meeting with the Guardians, some say they went into hiding to raise their children who may still be living among the Seven Realms.

There are tales of people who have seen large creatures stalking the barren lands - calling them Obsidians, feared creatures that will live for eternity and will one day bring back the age of the Ancients.

Others have heard the sound of a soft lullaby being hummed in the dead of night by voices of gods or demons.

Wanderers happened upon a small cave some years ago with stones carved of their story - every so often, a bowl of scented embers would be left there, the stones adorned with flowers that decorated the walls of the Cave of The Forgotten.

A tomb carved in memory of the lovers that may have been the rise of a new Ancient age.